This Spanish report shows a white UFO with arms on it…remember who I said most structures and alien UFOs are either white ceramic, flat black, or metallic? Well this is a white ceramic looking one and its really big. It’s 100meters across! It was found in some Japanese photos and its there in only one photo. In other photos of the asteroid, it is gone, meaning either it was photoshoped out or it flew away. If you know the URL to this actual photo, please tell us in comments. I searched for it, but could not find it. Thanks, SCW. 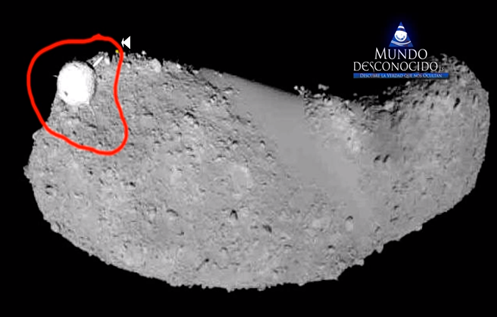 In 2003, the Japanese Hayabusa probe was launched with the intention of photographing and analyzing the asteroid 25143 Itokawa during shooting of the probe, a photograph shows a strange spherical object of apparent large photographs shown later said free asteroid of the spherical array.
The AJAX (Japanese Space Agency) seems to give the public more pictures that could unravel the mystery, despite shooting in 1500, only a small part of them are made public. What is this strange object …? Perhaps a non-land-based? Using asteroids as platforms or stations for some unknown purpose?, Why Japan selected the asteroid? Perhaps they had previously observed an anomaly?
Tweet
Pin It