Search
Home
Discovered images
Back in 2011 we reported “Nasa Reports First Evidence Of Flowing Water On Mars“.
In latest update, US space agency Nasa said on Monday its Mars Reconnaissance Orbiter and Odyssey orbiter have sent back clues that liquid  water flows on mars  may still exist today on the Red Planet.
The spacecraft spotted “dark, finger-like markings” that advance down some Martian slopes when temperatures rise, as well as corresponding seasonal changes in iron minerals on the same slopes, Xinhua quoted Nasa as saying. 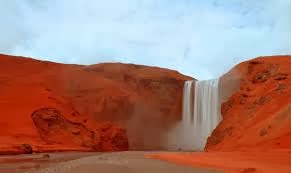 One suggested explanation for the phenomenon is that “brines with an iron-mineral antifreeze”, like ferric sulfate, could flow seasonally on parts of Mars, it said.
Researchers call these dark flows “recurring slope lineae (RSL)” and so far they have found 13 confirmed RSL sites on Mars, according to the space agency.
“We still don’t have a smoking gun for existence of water in RSL, although we’re not sure how this process would take place without water,” said Lujendra Ojha, lead author of two reports published in the journals Geophysical Research Letters and Icarus.
Although the team did not find any spectral signature tied to water or salts, they did find distinct and consistent spectral signatures of ferric and ferrous minerals at most of the confirmed RSL sites.
The researchers said these iron-bearing minerals were more abundant or featured distinct grain sizes in RSL-related materials as compared to non-RSL slopes.
“Just like the RSL themselves, the strength of the spectral signatures varies according to the seasons. They’re stronger when it’s warmer and less significant when it’s colder,” Ojha said.
One possible explanation for these changes is a sorting of grain sizes, such as removal of fine dust from the surface, which could result from either a wet process or dry one, the researchers said.
Other explanations could be an increase in the more-oxidized component of the minerals, or an overall darkening due to moisture. Either of these would point to water, even though no water was directly detected, they noted.
The researchers also compared new observations with images from previous years, revealing that RSL are much more abundant some years than others.
Tweet
Pin It