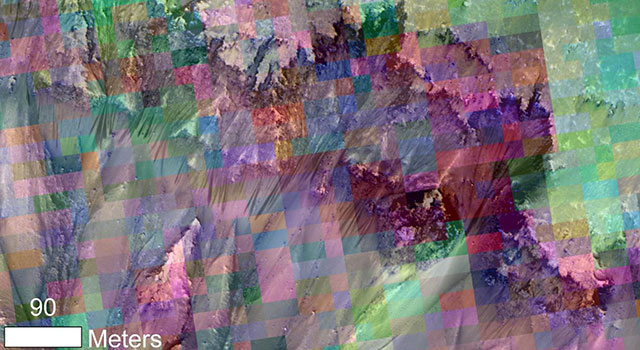 This newly released image shows a potential water flow on the surface of Mars. (NASA/JPL)

Scientists at NASA’s Jet Propulsion Laboratory say new images from the surface of Mars may hold evidence that flowing water exists on the planet.

Orbiting spacecraft captured the imagery, which appears to show liquid flowing down a slope on the planet’s surface during a seasonal change in which surface temperatures rise.

“We still don’t have a smoking gun for existence of water in RSL, although we’re not sure how this process would take place without water,” said Lujendra Ojha, lead author of the new report and a graduate student at the Georgia Institute of Technology. RSL refers to recurring slope lineae, the techincal term for the potential water flow.

“The flow of water, even briny water, anywhere on Mars today would be a major discovery, impacting our understanding of present climate change on Mars and possibly indicating potential habitats for life near the surface on modern Mars,” said JPL’s Mars Reconnaissance Orbiter project scientist Richard Zurek.

In theory, that could mean previously frozen water was temporarily melting and moving downward.

But even “warm” temperatures on the red planet’s surface are still well below freezing. So, how could water move at all?

NASA says iron-rich minerals on the planet’s surface, such as ferric sulfate, could act as a sort of antifreeze, allowing water to remain liquid despite freezing temperatures.

The potential finding follows a 2011 study from Ojha that first pointed to potential saltwater flows on the planet’s surface. In his new paper, Ojha said the water flows appear to continue for about two months’ time.

The results were published in the latest issue of the journal Geophysical Research Letters.