The 715 newfound planets, which scientists announced today (Feb. 26), boost the total alien-world tally to between 1,500 and 1,800, depending on which of the five main extrasolar planet discovery catalogs is used. The Kepler space telescope is responsible for more than half of these finds, hauling in 961exoplanets to date, with thousands more candidates awaiting confirmation by follow-up investigations.

“This is the largest windfall of planets — not exoplanet candidates, mind you, but actually validated exoplanets — that’s ever been announced at one time,” Douglas Hudgins, exoplanet exploration program scientist at NASA’s Astrophysics Division in Washington, told reporters today.[Gallery: A World of Kepler Planets]

About 94 percent of the new alien worlds are smaller than Neptune, researchers said, further bolstering earlier Kepler observations that suggested the Milky Way galaxy abounds with rocky planets like Earth.

Most of the 715 exoplanets orbit closely to their parent stars, making them too hot to support life as we know it. But four of the worlds are less than 2.5 times the size of Earth and reside in the “habitable zone,” that just-right range of distances that could allow liquid water to exist on their surfaces.

The $600 million Kepler spacecraft launched in March 2009 to determine how frequently Earth-like planetsoccur around our galaxy. The spacecraft detects alien worlds by noticing the telltale brightness dips caused when they pass in front of, or transit, their parent stars from Kepler’s perspective.

Kepler’s original planet-hunting mission ended last May when the second of its four orientation-maintaining reaction wheels failed, robbing the spacecraft of its ultraprecise pointing ability. Still, scientists have expressed confidence that they will be able to achieve the mission’s chief goals with the data Kepler gathered during its first four years in space.

Those were very productive years. Kepler has flagged more than 3,600 planet candidates to date, and mission team members expect that about 90 percent of them will end up being the real deal.

Indeed, the 715 new planets were pulled from just the first two years of Kepler observations, so more big planet-confirmation hauls could be coming as researchers work their way through the rest of the mission’s huge database.

All of the 715 newfound alien planets reside in multiplanet systems, just like Earth. Taken together, the new planets orbit a total of 305 stars, researchers said. And these systems are generally reminiscent of the inner regions of our own solar system, where planets travel around the sun in circular orbits that are more or less in the same plane, they added.

“These results establish that planetary systems with mulitple planets around one star, like our own solar system, are in fact common,” Hudgins said. 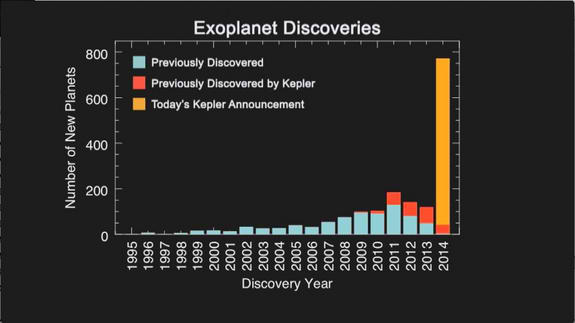 Scientists validated the newly discovered worlds using a powerful and sophisticated new method called “verification by multiplicity,” which works partly on the logic of probability.

During its original mission, Kepler stared continuously at more than 150,000 stars, finding planet candidates around several thousand of them. If these candidates were distributed randomly, just a few would reside in multiplanet systems. But Kepler has found hundreds of such systems, a fact that helped scientists identify the 715 bona fide new planets.

“Multiplicity is a powerful technique for wholesale validation that will be used again in the future,” said Jason Rowe of the SETI (Search for Extraterrestrial Intelligence) Institute in Mountain View, Calif.

The five main exoplanet-discovery databases, and their current tallies (with the new Kepler finds included), are: the Extrasolar Planets Encyclopedia (1,790); the Exoplanets Catalog, run by the Planetary Habitability Laboratory at the University of Puerto Rico at Arecibo (1,790); the NASA Exoplanet Archive (1,749); the Exoplanet Orbit Database (1,490); and the Open Exoplanet Catalog (1,714).

The different numbers reported by the databases reflect the uncertainties inherent in exoplanet detection and confirmation. 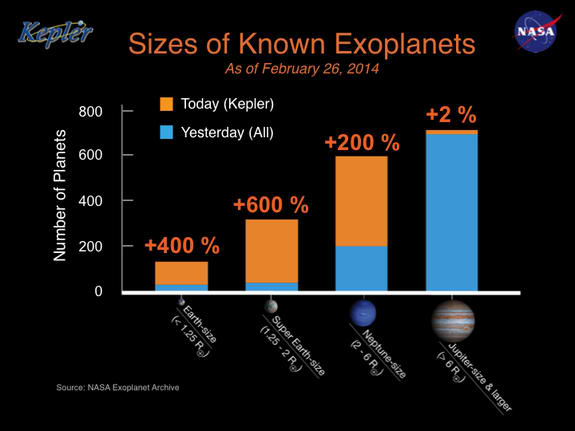 While Kepler’s original mission operations have ended, the spacecraft may not be done hunting for alien planets. Team members have proposed a new mission for Kepler called K2, which would allow the observatory to search for a variety of celestial objects and phenomena, including exoplanets, supernova explosions and comets and asteroids in our own solar system.

NASA is expected to make a final decision about the K2 mission proposal by this summer, officials have said.