Mysterious rock found by Mars rover: ‘We were absolutely startled’

Something’s on Mars that might not have been there before.

As NASA’s rover Opportunity continues its trek across the red planet, discoveries keep rolling in. Like, for example, a jelly doughnut-size rock that mysteriously appeared in front of the rover. 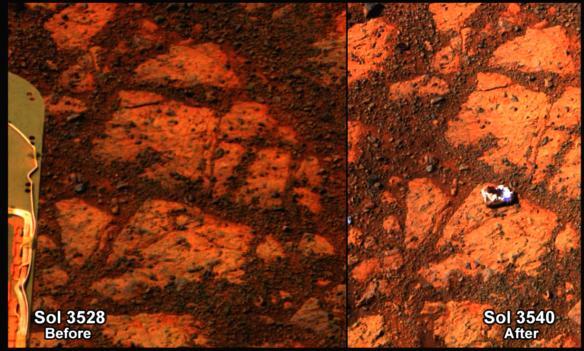 The rock was discussed at a recent NASA event celebrating the 10th anniversary of the Opportunity rover’s landing on Mars. Scientist Steve Squyres explained to the audience that the mystery isn’t so much how the rock got there (he seems to think one of the rover’s wheels kicked out the rock while puttering along, but can’t be sure), but rather what exactly is in the middle of the “jelly doughnut,” CNN reports.

One thing is for sure. It isn’t jelly. Or even custard. Sorry, Homer.

He added, “We’re completely confused, we’re having a wonderful time, everyone on the team is arguing and fighting.”

Discovery.com spoke with Squyres about the rock, nicknamed “Pinnacle Island”:

Scientists believe the rock, if it was indeed usefully flipped by the rover’s wheel, landed upside-down, allowing instruments to see a side of the surface not normally visible.