Ufo history that they say it takes ten thousand hours to become a true ‘expert’ in a particular field, which equates to roughly 416 full 24 hour days, well over a year. Do I buy into that concept? Not necessarily, but what I can tell you is that far more than ten thousand hours have been devoted to the study of the Cash-Landrum incident, and we’re no closer to any final answer on this particular topic. I thought it might be worth taking a closer look at the facts of the case and perhaps shedding some more light on what is widely considered to be one of the ‘Top 10’ CE2 UFO cases on record. For those of you who have not heard of this incident I’ll give you a brief overview, but there are plenty of resources on the web to read further details about this event.

A Diamond of Fire

UFO history last December 29, 1980, Betty Cash, Vickie Landrum and Colby Landrum (Vickie’s 7 year old grandson) were driving home to Dayton, Texas in Betty’s car after eating dinner at a restaurant. At around 9:00 PM, while driving on FM 1485 through dense pine woods the witnesses said they observed a bright light above the treetops. They initially thought the light was an aircraft approaching Houston Intercontinental Airport (now Bush Intercontinental, approximately 36 miles away) and didn’t pay much attention to it. A few minutes later on a bend in the road the witnesses saw the same light as they noticed previously, but it was much closer and extremely bright as if the sky itself was on fire. 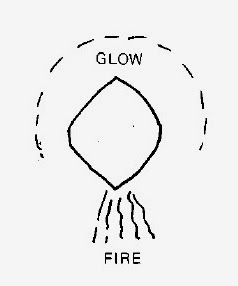 The light, they claimed, emanated from a diamond-shaped object about the size of a water tower which hovered just below treetop level. The base of the craft, which was notched off just like the top, was “belching flames and emitting significant heat.” Betty stopped the car to avoid the flames, but the car interior became hot, and they were forced outside where the heat from the object burned their skin. The witnesses, who could feel a burning sensation on their faces, were absolutely terrified and questioned what they were seeing, Vickie was convinced it was the second coming of Christ as she had no belief or interest in extraterrestrials. Betty stepped out of the vehicle to get a closer look, apparently unaware–and unafraid–of the ultimate consequences of her decision. Vickie partially exited the passenger side but had to contend with a terrified Colby who tried wrestling her back into the car.

Though it was intensely bright, the object appeared to be dark and metallic with small blue lights visible around it’s middle. Periodically, flames flared out of the bottom accompanied by a “whooshing” sound. Each time the object rose a few feet, only to settle back toward the road when the flames momentarily ceased. Had the UFO not come to rest over the road the cone of fire from its lowest point would have set the forest on fire. Betty later reported that the object also emitted an intermittent bleeping sound, a little known detail of the case. As the UFO ascended and cleared the treeline, Colby counted 23 helicopters converging on the craft, some with military markings, some without markings at all. They would later identify them as twin-rotor CH-47 Chinooks used by the US Army, Marines and Air Force. Betty recalled that “They seemed to rush in from all directions…it seemed like they were trying to encircle the thing.” Within a few seconds the UFO had disappeared behind the trees lining the road.
Even though it was a cold winter evening in Texas, the surface of the car was soon too hot to even touch. It was then that they realized how hot the interior of the car had become. They switched off the heater and put on the air conditioner instead.
Tweet
Pin It